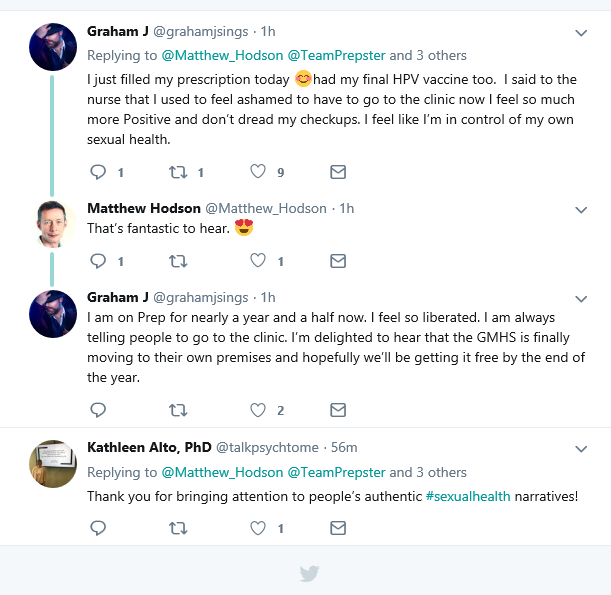 * Misplaced feeling of being in control – TICK

Is the man using condoms? We don’t know because of course as usual they aren’t mentioned. If he is then why wouldn’t he say so? If “health professionals” truly wanted to “end HIV” and protect the health of gay men why wouldn’t they mention condoms at every opportunity?

Read between the lines and see the agenda…

If the man isn’t using them then he’s a fool and still has a lot to “fear” from STIs despite his sensible decision to have the HPV vaccine. PrEP only gives protection against HIV.

The only reason to “dread” visits to the clinic is if you haven’t been taking care of your health. If you don’t use condoms you are at high risk from STIs such as gonorrhoea, herpes, clamydia, hepatitis, warts, syphilis and even PrEP-resistant strains of HIV – though those are rare so far.

By seeking out and being open to sex without a condom you meet other gay men who are high risk and who are more likely to have STIs. Infections are skyrocketing because of gay men who don’t use condoms.

Regularly being infected with diseases, taking antibiotics and PrEP and meeting gay men who are more likely to have a STI is not a healthy lifestyle. It is just slightly better than being an obsessed barebacker who is inevitably going to become infected with HIV.

There is nothing “liberated” about getting endless STIs. It’s sleazy and irresponsible. The more antibiotics that are dished out, the sooner they won’t work anymore due to resistance. Within the next 10 years STIs such as gonorrhoea may well become almost untreatable and will even kill in a small percentage of cases because nothing can be done. Imagine that situation. There will be a lot to “fear” then.

Gay men on PrEP who don’t use condoms will be among the first to catch antibiotic resistant STIs. Through their irresponsible behaviour they bring forward the day when we will all be at risk.

So is the pill-popping man really in control? Or are drug companies controlling his life? What about his health 20 years from now? The longterm effects of the drugs in PrEP are only just becoming known. Will he suffer bone or kidney problems at an earlier age? Will he be fearful and feel in control then?

Perhaps like many young men he doesn’t care and problems 20 years from now seem a long way off? But it will come along faster than he imagines and he will then face perhaps another 30 or 40 years of life when there isn’t so much sex and just the consequences to live with.

One thought on “Ticking the boxes”