Looking through a selection of covers from FS Magazine we noticed something interesting.

When the cover features a partially-dressed white man, often the crotch area is cropped, completely covered or partially hidden by hands or text. One white man is in black underwear, so the shape of his “package”can’t be seen.

However when the cover star is a black man it seems to be a different story. Genitals bulging in light or colourful underwear, not hidden or partially obscured by text. As if the “packet” is much more of a focal point of the picture. 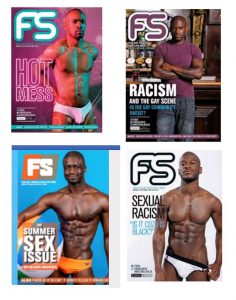 This seems to play to the racist stereotypes that have always been an issue among some white gay men. One of the covers actually has the headline “Sexual racism. Is it cos I is black?” But then look at two of the other ordinary covers featuring black men…

One model has his hands behind his back, pushing out a large bulging package in white briefs with a scowl on his face and lit with a red light.  What is the message there?

We certainly like to see photos of handsome men of colour, and we can’t pretend to have checked every cover, nevertheless we were surprised by this random selection.