The endless bashing of the NHS by the gay media and gay journalists is disgusting and is something they may come to regret.

The latest is a one-sided and contradictory article on Buzzfeed with the title “The NHS Refused To Give This Man The HIV Prevention Drug. He Got HIV” and it raises a number of questions. 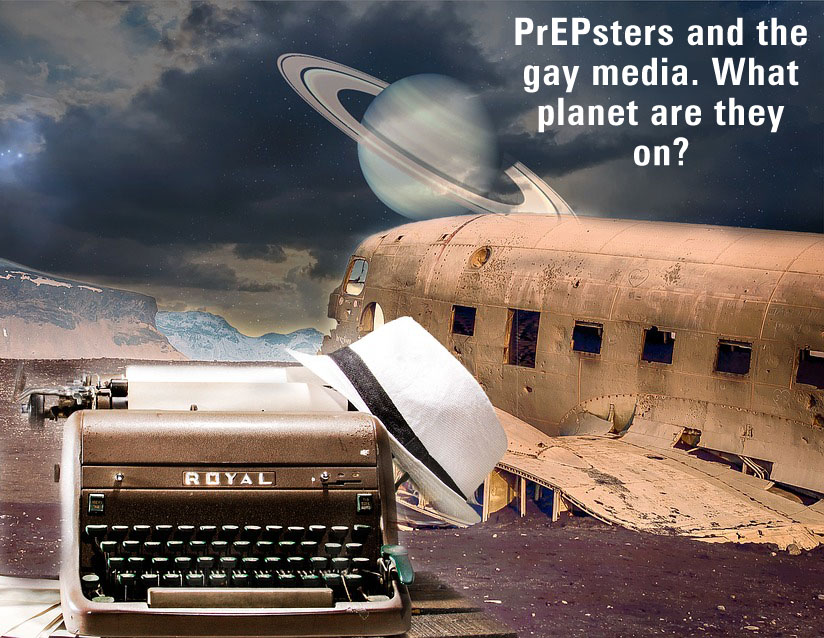 Supposedly a twentysomething man asked his local sexual health clinic for PrEP. However he was told places on the Trial were full up and “instead, the clinic staff suggested he buy the drugs”. Later he tested HIV+.

Over the years we have witnessed first hand how gay organisations and journalists manipulate to push a particular agenda.

Notice how the clinic isn’t named and no accurate date is given for the man’s visit. It happened “in the autumn of 2017” we’re told. This prevents anyone from checking when the clinic concerned had no places left and verifying this story.  The PrEP Impact trial wasn’t launched by NHS England until October 2017.

We suspect that the man would have been advised by NHS staff to use a condom. But curiously that isn’t mentioned. In fact the word “condom” doesn’t appear once in the article which is written by Patrick Strudwick. How odd. Why wouldn’t you?

Understandably the real name of the man isn’t given. In the article he is called “Ron”.

However Strudwick writes that “a leading HIV charity has revealed that it is aware of several other similar cases of patients who were refused PrEP because their clinic had no capacity left and who then tested positive for the virus”, and doesn’t identify the charity either.

Why isn’t this “leading HIV charity” named? Other organisations are mentioned in the article.

Why would a leading HIV charity not want to go on the record if it has evidence of this? Why not list the clinics and the dates when PrEP couldn’t be obtained? Once again it means that the claims can’t be factchecked.

In the past claims have been made about “most” clinic having no places. One instance was when Greg Owen from Terrence Higgins Trust appeared on BBC Breakfast. However at the time the NHS England Trial website showed that almost all clinics in England and Wales had places.

Ron says his infection with HIV will “cost the NHS much more in the end”.

This is a classic PrEPster line and has always been part of the campaigning. How convenient for Strudwick’s article that Ron actually voiced this about the nasty old NHS.

Of course two can play this game. It could be said that people might become HIV+ due to Patrick Strudwick not mentioning condoms in his article. In turn THAT will mean that the NHS will have to fund HIV treatment for those people. Even if just one becomes positive due to this omission, it could cost the NHS — really all of us who pay taxes — hundreds of thousands of pounds over a 50 year period.

All because nasty old Patrick didn’t mention condoms in his article.

In truth Ron’s health was in his own hands. There is no inevitability to getting HIV. It isn’t easy to catch unless you put your penis into an ass-hole or vagina without a condom. The NHS says condoms are 98% effective against pregnancy when used properly every time. We say even more effective against HIV.

Ron chose not use condoms. Perhaps it was out of ignorance because agenda-led “health” organisations have mentioned condoms less in recent years? Once again, that leads to more HIV infections and more costs for the NHS. Those nasty old organisations!

Or perhaps Ron just just didn’t want to use a condom. His own actions led to him becoming HIV+ and an ongoing cost for the the NHS (and all of us) for years to come. Don’t blame the nasty old Health Service.

This is another article about a supposedly virtuous and responsible HIV+ person. It’s always the fault of someone else. As usual, Ron is presented as now worrying about others who can’t access PrEP. This is another cut and paste stock scenario from the big handbook of how to be a pro-PrEP journalist or campaigner. Tick!

Where was his concern for others when he was having sex without a condom? Even after he’d been turned down for PrEP he continued being irresponsible and finally tested HIV+ the following February (2018).

Did he transmit HIV to anyone else in the period between asking for PrEP and testing positive and being put on treatment? That wouldn’t be very nice would it?

When he asked for PrEP “he was concerned that the amount of unprotected sex he was having would put him at risk of contracting the virus.” Isn’t it amazing how a man can be aware that they are putting themselves and others at risk and can get themselves along to the hospital to ask about PrEP, but apparently can’t get it together to put a condom on their own penis?

Hard to believe isn’t it?

Is Ron STILL having sex without condoms now he’s HIV+? Our guess is yes. He may be out there spreading Sexually Transmitted Infections (STIs) other than HIV. It may affect his own health too. An STI could make his HIV meds less effective so he becomes infectious again and he could contract a different strain of HIV which will complicate and reduce his treatment options.

Of the NHS decision to go with a three year trial of PrEP, Strudwick writes that “critics say it was implemented under false pretences — that limiting the numbers was simply a way of keeping costs down rather than ascertaining how best to roll out the treatment.”

But then he adds “many in the HIV sector were also concerned when a legal case regarding the use of generic, cheaper versions of PrEP earlier this year meant the NHS could offer a full rollout of the drug because such generics would now become available — but NHS England refused to do so.”

So it rather sounds as if cost ISN’T the concern for the NHS doesn’t it? Some prominent health consultants say that we’re heading for catastrophe with declining condom use due to PrEP and emerging drug resistant sexually transmitted infections. Could that be one reason why the NHS is being cautious? We think so.

Other countries rushed into providing PrEP. But in the case of some  such as the USA — which has some of the most over-medicated people in the world — there’s an enormous desire to generate profits for drug companies. Our NHS isn’t like that.

When you read an article like this one from Buzzfeed always take note of what isn’t mentioned and which statements aren’t backed up by identifiable sources that can be verified. Consider what the agenda might be and see how many hackneyed situations and campaign buzzphrases have been shoehorned in to help promote the “game changing” PrEP.

We don’t know what Mr Strudwick’s HIV status is, negative we hope.

However quite a percentage of the people who are pushing the PrEP agenda and not mentioning condoms are themselves HIV+.

And yes of course we should be compassionate and provide treatment to all those who are HIV+. But let’s get real here… Because of the high cost of HIV treatment, many of these individuals cost society and the NHS more than they pay in taxes each year and likely that will continue to be the case for decades.

In some cases they made themselves a burden on society through poor judgement (and often are only too happy to tweet and post all the gory details in public). But now we’re supposed to listen to them and accept their “expert” views on PrEP and safer sex. As they sideline condoms and demand more spending by the NHS (on PrEP).

At the very least they should restrain themselves from bashing the NHS. It’s distasteful considering their circumstances and they should consider whether their actions might play into the hands of politicians who want to dismantle free healthcare in the UK .

What consequences might there be for them and their HIV treatment 10, 20, 30 or 40 years from now, if that was to happen?