The PrEPsters specialise in telling half the story. But, increasingly, gay men see right through it. 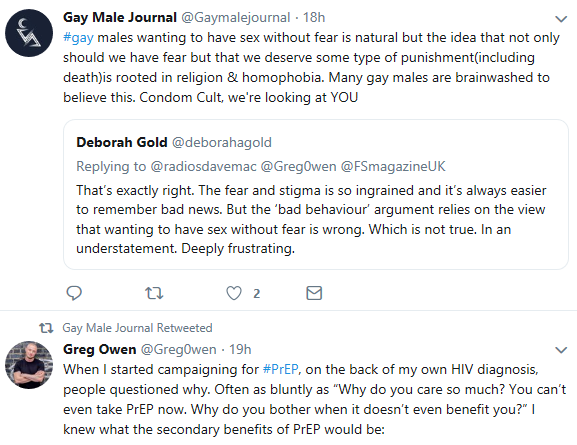 Here at GMAP we believe that a small focused roll-out of PrEP is sufficient. It should be aimed at gay men who have a chaotic life. Men who are out of control and really can’t get it together to protect themselves by making sensible choices and using condoms. We think the current 10,000 places in the UK is more than enough.

We’re against a mass roll-out of PrEP because we believe it will have a number of negative consequences which will far outweigh any benefit.

It will lead to more gay sex without condoms and that will mean more sexually transmitted infections (STIs) in our community. That’s something that will impact on all of us. In fact we’re seeing a great rise in STIs already amongst gay men who use PrEP.

Even worse, antibiotic resistant strains of STIs such as gonorrhea are becoming a problem around the world. Antibiotic resistant gonorrhea is a killer in a few percent of cases, as Health Consultant Dr Massimo Giola mentioned in his presentation recently. He believes that just a decade from now we could be back to a situation similar to 100 years ago.

In fact it’s Mother Nature who delivers death and misery by way of disease, and in all sorts of different ways – not just HIV- and PrEPster ranting won’t change a thing.

Deborah Gold tweets in reply about “ingrained” fear and stigma.

Many medical people and the drug manufacturers recommend that PrEP should be used with a condom. Why is that almost never the  message from the PrEPsters, despite their endless propaganda about “fear”? Also why do we never see campaigns from them encouraging gay men who are HIV+ to use condoms? It would make sense because drug-resistant strains of HIV are fairly commonplace and can compromise existing treatment for positive men.

The uncomfortable truth is that such a campaign would be unpopular amongst many positive gay men. Many of the PrEP campaigners are, themselves, HIV+.

Condoms are near 100% effective when used correctly. The reason you see figures lower than 100% is because of user failure. PrEP also suffers from user failure.

One difference is that PrEP only works against HIV. Why is HIV the only “fear” and why would anyone who genuinely cares about fear in others, undermine condoms by using phrases such as “condom cult”? It’s irresponsible and helps Mother Nature bring forward the day when we will all be a lot more fearful of those antibiotic resistant STIs. This is all leading to more fear in the near future. Not less.

Yes, antibiotic resistant gonorrhea in a world where fewer gay men are using condoms is something to be “feared”, surely? And what about herpes, warts, hepatitis and all the others? Aren’t these to be feared too?

What about the longterm side effects of using PrEP, such as bone density issues? Is this something to be feared? We think so. In a world with widespread antibiotic resistance, operations such as hip replacements would become risky. In fact we would all want to avoid visits to hospital as much as possible. We can all prepare for that by living a healthy life now.

However the PrEPsters don’t advocate a healthy life, they encourage gay men to be “fabulous sluts”.

STIs are a risk to HIV+ gay men because they can compromise HIV meds and make the man infectious again, as can other infections such as the flu. We’re told that many HIV+ gay men only get checked once a year. When did you hear the PrEPsters ever mention any of this? No, they prefer glib statements that positive gay men can’t pass on the virus when undetectable. Which is true when he is. But how can either of you be 100% sure about his status?

Young gay men are being encouraged to take PrEP, not use condoms and trust what positive men tell them. And, other than avoiding HIV, there is no regard for their health from the fanatical PrEPsters. These gay men may have another 50, 60 or 70 years of life ahead of them. Good health over a lifetime isn’t only about avoiding HIV now.

We all need to have some respect for Mother Nature, act sensibly and pace ourselves so we can enjoy the best possible health throughout our life.

PrEP many not benefit Greg Owen. But along with the rest of us he may find that his good health is affected in future due to the policies that are being promoted in connection with PrEP. There will be nothing “fabulous” about a dose of incurable drug-resistant gonorrhea.

The more STIs that are caught and passed on in your local community, the sooner things like drug resistant gonorrhea will be a problem where you live. The current policies of the PrEPsters help to bring forward that day.

Perhaps fear isn’t the word to use in all of this. Let’s say gay men should think of their longterm health, be aware of STIs, and make sensible choices to avoid them and other illnesses (obesity, alcoholism, smoking-related and so on)  whenever possible.

Being a disease-spreading “slut” or “truvada whore” is nothing to be proud of and doesn’t make good sense from a personal point of view. These men risk compromising their future health, not just with HIV. And, although they probably don’t care, they harm and undermine the gay community – all of us – with their irresponsible and selfish behaviour.