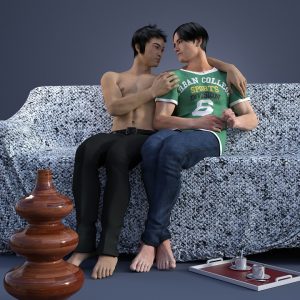 You meet Steve who has worked for a gay health organisation for over 10 years, for a date and possibly more. Steve discloses to you that he is HIV positive and claims he has been undetectable for many years. He says he takes his meds regularly and that those “bad boys” keep him healthy and also mean he won’t transmit HIV to you. Steve insists it is impossible for you to contract HIV from him and that condoms “don’t work for him”.

He insists that using a condom makes him feel “dirty”, untrustworthy and you should have nothing to fear from his seminal fluids being shot inside you. He believes the AIDS ad tombstones have instilled fear within the gay community and stigmatised the sex he craves. He refers you to several studies that, he says, proves that undetectable=untransmittable. He says you must believe the science that condoms are unnecessary when having sex with him, as the sexual landscape of HIV prevention has changed.

“Just ask any of my  u=u ambassadors and warriors who will tell you u=u is a ‘game changer’ where condoms are no longer needed,” Steve says. Steve grabs his phone and pulls up a gay online magazine aimed at young impressionable gay men. He shows an article from an NHS doctor who says we must trust HIV positive gay men who say they are undetectable and have unprotected sex with them as they don’t lie. We shouldn’t scare the children into using condoms, that is stigma, he says quite aggressively along with “I’m not predatory”.

Steve gets very angry saying he is sick and tired of saying we can kiss and hug, I can fuck without a condoms without risk of transmission!! I’m undetectable, get with the science not the stigma.

Steve says unprotected sex is natural and gay men have been forced into using condoms over the past 30 years due to “societal homophobia”. Told that our sex is wrong and to be feared. Remember “your mother was a barebacker” he smirks. All your worry is just worthless energy and you need to trust him. HIV positive men know their status and would not lie to you on such an important issue.

What would you do?

B. Ask for further evidence, a document from Steve’s doctor that he is undetectable, however this may cause offence.

C. Thank Steve for disclosing he is HIV positive and say you are happy the meds are working to keep him healthy. However you do not think trust is a safer sex strategy as gay men lie whatever their status. Say you always use a condom whatever status your partner claims to be. Also if he persists with this grooming for unprotected sex you will leave immediately.

D. Get the hell out of there fast! As Steve may deceive you and Stealth you, meaning he would put the condom on but cut off the tip to get the sex he wants.

2 thoughts on “Undetectable=Untransmittable? What would you do?”