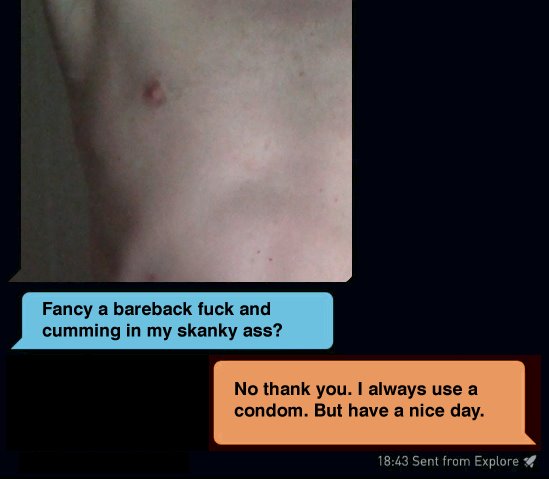 Tony Fakename is a member of the Manchester branch of Cockaholics Anonymous. He shared a screenshot of the message to his Facebook, where it has been shared dozens of times, and prompted a rush to comment from cynical gay (ill)health (un)professionals eager to justify their salaries and organisation’s funding.

In the exchange, Tony sends a photo of himself to the man who then callously refuses risky raw sex by saying “no thank you” and “have a nice day”.

The man also writes: ‘I always use a condom.’

Speaking to ChocolateStarFishFakeNews, Tony said, ‘It’s not common to get those messages but it does happen. I normally enter in to dialogue with them to try and get them barebacking. I’m very very persistent because I do like it raw.’ However, on this occasion, he found himself blocked.

Instead, he shared a screenshot of the exchange on Facebook, Instagram, Twitter, Tumblr, printed out 500 copies which he sellotaped on lampposts throughout the local town and had a tattoo of it done on his left buttock, as he tried to move on from the stigmatising experience. Tony also made a YouTube video which he published on his channel “Depression Update” which has been viewed more than five times.

He admits that he at first was upset by the message. ‘I did have a cry and called my friend Greg. But then I put a huge buttplug up my arse, took some drugs and invited ten strangers round for a forgettable all weekend chemsex sesh.

‘Cruel if you’re over-sensensitive, unhinged and a bit mental’

Matthew Whorehouse, the chief executive of National Nonsense says thinking of your own health instead of giving in to a demanding mentally ill barebacker is ‘cruel’ and unacceptable.

‘You’re much less likely to get an STI from a barebacker who has felt able to tell you than from someone who is sitting in the local STI clinic waiting for treatment for a confirmed case of syphilis, Hepatitis C and gonorrhea but doesn’t know it,’ Matthew said, grinning.

Three-quarters of barebackers have experienced sexual rejection over their anti-social disease spreading behaviour.

‘We can all do our bit to end the education and commonsense that surrounds condoms.’

‘It may well change the health of kidneys and bone density in the longterm too,’ he laughs. ‘We don’t really know. But I don’t care about that because I’ll be retired and well out of it by then.’

See also
Watch stealthers read mean charges brought against them by the Crown Prosecution Service for passing on HIV despite drinking their own urine at the time to cure it.