You can read the details of this story on the GayStarNews website . We have a few questions to raise about the article… 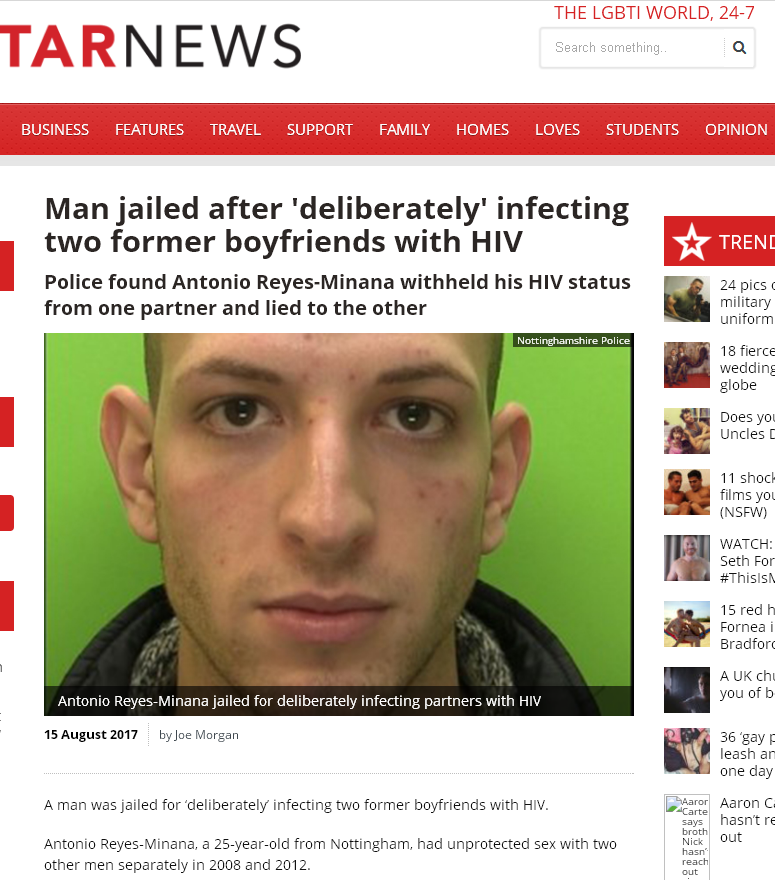 Why does the headline and first paragraph have the word “deliberately” in inverted commas? Is GayStarNews implying that this wasn’t an intentional act? Yet the police, Crown Prosecution Service and a court of law decided it was. Is this another example of arrogant LGBT people who think they know better and are so special that they are above the law?

Deborah Gold, the chief executive of The National AIDS Trust (NAT), is always good for a laugh and doesn’t disappoint here. She criticises the police for describing HIV as a “terminal illness.”

Is HIV a terminal illness? A dictionary definition is “forming or undergoing the last part of a fatal disease.” So perhaps not in that sense. But every year a few people get sick and die when HIV leads to AIDS-related illnesses, even when they’re on treatment.

If you’re infected by someone deliberately and then are unlucky enough to have issues with the medication, related infections and eventually die as a result, then that certainly is fatal and terminal for you and in part it’s the fault of the person who maliciously put you at risk. You have had your life taken away.

Of course it takes two to tango and the men who were infected in this case should have insisted on condoms being used. Perhaps if the gay (ill)health charities had been more diligent in promoting condoms over the last decade this incident wouldn’t have happened? How many HIV infections and suicides could have been prevented if they had?

But if you have a life-changing transmittable disease then, as a decent human being, you do have a major responsibility not to pass it on recklessly. And if you have mental health issues, well that isn’t a get out of jail card any more than it would be if you physically murdered, or beat someone while in a deranged state.

Of course the gay (ill)health professionals believe that every HIV+ gay man is a victim, no matter how twisted and destructive he is to others.

Deborah Gold doesn’t miss out on the chance to highlight “stigma”, the favoured buzzword of the moment, claiming that the use of the phrase “terminal illness” by the police adds “to the culture of fear and stigma.”

No Ms Gold, it’s the actions of this man and the subsequent publicity surrounding his prosecution and conviction which leads to “fear and stigma” about HIV. He is responsible.

This was a golden opportunity for The National AIDS Trust to hammer home the need to use condoms and not trust sexual partners too readily. Also to condemn irresponsible behaviour. Instead it becomes an attack on the police.

Currently the gay (ill)health organisations are busy telling impressionable young gay men that they can f*ck HIV+ men who claim to be “undetectable” for HIV and often condoms aren’t even mentioned.

Like everyone else, HIV+ gay men come in all shapes and sizes. Some are lovely and honest, others are devious liars. Personally we know gay men who were infected deliberately – sometimes by a partner in a relationship. Yet the current advice from some of the gay (ill)health organisations seems to be based on the crazy notion that all gay men are virtuous and can be trusted to keep you safe.

This case shows how wrong-footed that thinking is and is an example of what happens when pie in the sky, politically-correct LGBT bollocks meets reality.

And what makes it worse is that a lot of this bollocks is funded with public money.

Well done all concerned for pursuing this case. Hopefully we will see more, including against men who deliberately remove or damage condoms during sex.

The day after we posted this, GayStarNews edited the article. Removing the word “deliberately” in invertedly commas in two places, including the headline, and replacing it with “recklessly” (without inverted commas).