If you haven’t visited the seedier side of gay hook up websites, some of the content will probably come as a big shock and may strike you as tragic.

On “BarebackRT” for example, men now routinely state whether they are hepatitis C “positive” or “negative.” 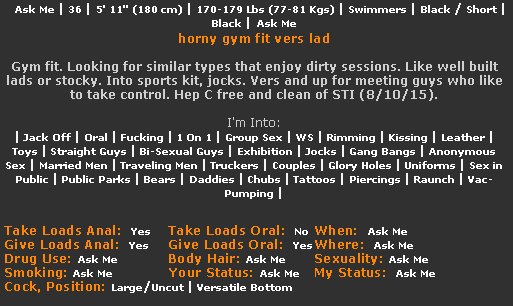 Things have moved on from HIV, because many of them are already positive. Hepatitis is the new sexually transmitted disease they don’t want to catch. This shows the downward spiral these individuals are in.

In reality you don’t really need to ask…

As always the message is that you can’t trust anything a man tells you when he wants sex. “Clean of STIs” means absolutely nothing, particularly on a site like this where many of the men would seem to have mental health and self harming issues.

Many have “butter wouldn’t melt” profiles on the more mainstream dating sites.

For this reason, BarebackRT can be a check for who to avoid in your local area and form a useful part of your overall safer-sex strategy, though the politically-correct gay (ill)health organisations and media will never suggest it.  They’re more worried about the barebackers being “stigmatised” than your safety.

Barebackers are more likely to come with sexually transmitted infections and twist their face when a condom is suggested. Sex with a man who doesn’t really want to use a condom is never a good idea. It isn’t unknown for some to slip the condom off half way through (a criminal offence).