It’s 1990. You need a pee desperately, so you pop into one of the many public conveniences which were still around in those days. You begin to pee but then, oh no, you notice that also standing at the urinals is a sleazy, exhibitionist “cottage queen.” 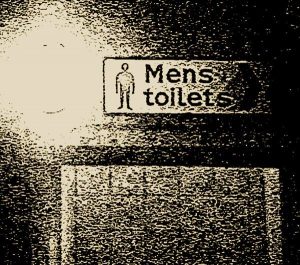 Even though you’ve given him no encouragement, just a shocked glance, to your horror he turns towards you, displaying his cock. “Look at this,” he says. “Have you seen one like this before? Go on, touch it, everyone wants to.”

You tell him to “fuck off,” but he takes any interaction as a come on and now is wanking furiously. “Would you like to come back to my place and fist me?” he asks. “I’ve got a very tight arse.”

This repellent and bizarre man gets a kick out of exposing himself in public and telling strangers about his extreme sexual activities. He’s convinced himself everyone else indulges in the same things and is up for it. He’s addicted to his behaviour and like many addicts he wants others to join him in his activities. To him, flashing in cottages is “liberating” and he doesn’t care what effect it has on anyone else.

25 years later, most public toilets have closed down, partly due to people like the flasher. But things have moved on and his modern-day equivalent has a paid job at a gay (ill)health charity. He writes for its magazine, tweets and helps formulate all kinds of rather twisted and back to front policies based on his self-indulgent preferences.

But most people in his immediate circle are similar and he’s convinced that every gay man nationwide is the same too. If not then they’re repressed and self hating and “slut shaming” him and his friends. He likes to write and tweet about sex in graphic terms and describe his personal sexual antics in detail. He gets off on letting it all hang out and wants everyone to join him in doing so as, like all obsessive addicts, he feels that endorses his activities.

Sadly for him, in the same way that “cottages” were closed down, the days of this unhinged behaviour being funded with public money under the guise of “health advice” (when actually it’s the complete opposite ) are drawing to a close.