The gay elite love to put a spin on history. Often the aim is to bash the Conservative party and police (now even the NHS), cover up their own failings and enhance and artificially promote whatever they’re doing now.

No doubt you’ll have heard how the Thatcher government was supposedly slow to act and, when it did, it “frightened” people with the famous AIDS monolith (tombstone) public  information film.

These critics have a “glass half empty” attitude. Because there are about 50,000 gay men living with HIV in the UK now (and 100,000 people overall), from their twisted perspective that means condoms failed and the 1980s Tories are to blame. Many of them hate condoms of course. It’s how they ended up positive.

But from a different and less batty perspective, around 93% of gay men in the UK are NOT HIV+. A lot of that is thanks to condoms and because that 1980s ad got the message across very effectively. A great success.

And if you doubt that, look across to the United States. In the Atlanta area alone there are some 37,000 people living with HIV and more than half of black gay men are positive. That gives an idea of how different things could have been in the UK if the message hadn’t got around effectively.

They see the current “stigma” that is faced by HIV+ people as a legacy of the frightening ads. As you’ll have noticed with PrEP, they struggle with the idea of other consequences that may end up being worse. Somehow they can’t admit that we could have ended up with ten times as many people living with HIV now if it hadn’t been for that “scary” ad that everyone talked about.

As a life threatening illness that had no effective treatment until the second half of the 1990s, HIV came with huge stigma and fear all by itself. It didn’t need the help of Mrs Thatcher. Indeed it could be said that these days gay men don’t take STIs seriously enough.

The first time many us of heard about HIV was in a BBC Horizon programme in April 1983. Called “Killer In the Village” from that it’s clear that in 1983 experts still weren’t sure how HIV was transmitted.  There were all kinds of theories such as the over use of antibiotics to treat other STIs and poppers…

Actor Rock Hudson died in October 1985, a wake up call for many gay men, although gay newspapers had been writing about HIV for several years. Then in 1987 the AIDS monolith ad appeared on TV and a leaflet about AIDS was delivered to every household in the UK. It advised that “anyone can get it, gay or straight, male or female. Already 30,000 people are infected.”

The National Archives notes that “by this time, the World Health Organisation had been notified of 43,880 cases of AIDS in 91 countries.” The monolith ad was followed by one featuring an iceberg.

Condoms had never been advertised on TV. The rules were changed and in 1987 the first ads appeared. This is something the critics never seem to mention as it doesn’t fit the “government didn’t do enough” agenda.

According to Wikipedia Mates condoms were launched by Richard Branson in 1987 as an inexpensive option. Incredibly this ad was even screened on the non-commercial BBC. That’s how enthusiastic everyone was about tackling HIV and AIDS.

The instance above appeared on BBC1 between Cagney and Lacey and Monty Python’s Flying Circus (the scheduled boxing had been cancelled) at 22:05 on Saturday 14 November 1987. The following year Branson sold the company and Mates brand for a reported £1m. Whether, in doing so, he profited from the goodwill of the likes of the BBC in the face of the AIDS crisis it’s hard to say as we don’t know all the details. But it does seem a little peculiar. 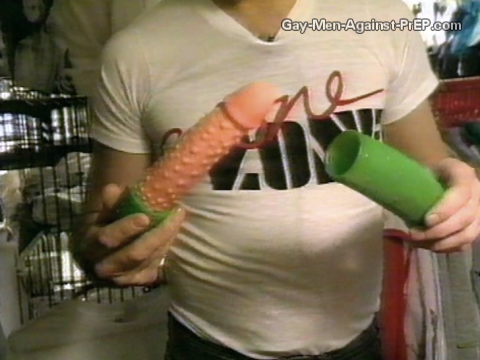 Britain was a different place in those days. A generation who weren’t used to talking about sex in public were in government. Any representation of an erect penis was considered obscene. Even a cucumber with a condom on it could have fallen foul of that in theory.

But gradually things changed. The scene above, from one of the first episodes of the late night James Whale Radio Show in December 1988, could even be the first time a sex toy appeared on British TV.

By 1992 public information films like the one below were being screened. This was recorded from Channel 4.

In it a real gay man talks about how a former partner passed on HIV to him and it’s really quite moving. It features scenes in what looks to be a gay bar and was pretty groundbreaking for an ad at that time. The Conservatives were still in power but now John Major was Prime Minister.

Such a politically incorrect ad wouldn’t be allowed now when we’re being told that we should trust HIV+ gay men who claim to be “undetectable” for the virus and who “can’t pass it on if they’re on effective treatment”. “If” being the ass-covering word in that sentence.

It’s worrying that those who are supposed to protect our health and who receive large sums of public money to do so will not take a break from political correctness and tell gay men the things they need to know to really stay safe and free from HIV.

In 1994 this “ad” appeared at the end of the Channel 4 gay and lesbian magazine programme “Out”. The days when health organisation GMFA did a good job promoting condoms.

How can we trust these organisations to tell us all the facts about PrEP?

Here at GMAP some of us have been using condoms for more than 30 years. Occasionally we’ve had sex with men we knew were HIV+ and no doubt some we didn’t know were. We always used a condom and we’re negative.  That speaks for itself.