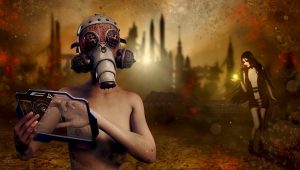 The gay (ill) health (un)professionals are like a broken record, pushing a bizarre narrative that is crumbling around them in the face of shocking facts, statistics and downright common sense.

Amazingly they are still going for the “sex without fear” buzzphrase. Suggesting that gay men no longer have to worry about their sexual health and more importantly not bother with wearing those pleasure denying, intimacy impeding, social controlling evil condoms. All you have to do is take this magical “wonder drug” PrEP. A “game changer”.

However real life is very different from the bobble-headed world of the CEO who is endlessly tweeting double speak, pulling at the heartstrings and bemoaning how hard done by the gay community has had it over the last 30 years. With the spectre of death from AIDS looming due to not using condoms. Obsessed that we are all potential victims of HIV and should be free from the shame of unprotected sex, just like straight people supposedly are. We need the bareback equality that PrEP brings, is the narrative. A liberation for gays! Fear gone forever! One pill a day keeps the AIDS away!

Viruses and bacteria don’t care about your politically correct sexual health equality, your supposed suppression by the straight male patriarchy – which criminalised gays until the end of the 60s – and your idiotic idea that condoms were about denying gays the sex they “deserved” in a liberal democracy. They certainly don’t give a toss about “slut shaming”.

So we are in a situation where HIV+ gay men are infecting negative guys with Hep C at an “astounding” rate, according to one Prepster, and then vice versa reinfecting each other. Where syphilis, super gonnoreah, chlamydia, shigella, a new one called MG and even sepsis are normalised everyday occurances, casually brushed off with antibiotics (or at least by the remaining ones that work, for now).

But hey PrEP saved us from HIV! (for now anyway). What a “game changer” it is! We must thank the gay ill health experts for their “game changing” cultural shift which is destroying the safe sex agenda. And all due to them being wracked with guilt and shame due to their own HIV infection. Condoms were never the solution to them, but a problem to be solved.

We were so lucky we destigmatised unprotected sex to help the couldn’t-care-less barebacker with his guilt ridden shame of “condomless” sex and that he was able to stop self stigmatising and get “help”.