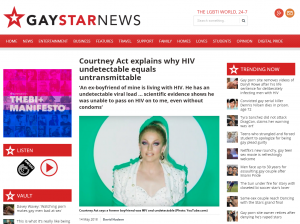 U=U seems to depend on the notion that HIV+ gay men can always be relied on to know their status at any particular time and, more importantly, to tell you the truth about it.

But HIV infection levels can change for a variety of reasons. Due to other illnesses, or through the positive man not taking his medication as recommended.

Gay men lie to get what they want and HIV+ gay men are no different. Indeed many positive gay men got infected in the first place because they trusted someone who lied, didn’t know or had a chaotic life (common on the booze and drug-fueled gay scene). In some quarters it’s viewed as politically incorrect to suggest that gay men lie and, heaven-forbid, HIV+ gay men. But yes they do.

Scratch the surface of an article like this one from GayStarNews and you can see how this crackpot message doesn’t add up.

“People living with HIV who are successfully treated do not pass HIV on to their sexual partners,” says the article.

Yes that’s true, but only as far as it goes because it’s just half the story. The key phrase there is “successfully treated”. There’s no mention of the possibility that the “ex-boyfriend” might not know, might lie about his infectiousness or might not take his meds as instructed. Around 11% of gay men who are positive are not undetectable at any particular time.

And here’s where GayStarNews trips itself up and the agenda is revealed:

“Wearing a condom is still recommended as it can help protect against a variety of other sexually transmitted infections, such as gonorrhea and syphillis.”

Hang on… You’re trusting that this guy is “undetectable” but somehow you’re at risk from “other sexually transmitted infections, such as gonorrhea and syphillis.” Is it due to him being dishonest and bringing home STIs? If so, how can you trust him on HIV?

Or perhaps you’re having an open relationship and are both at risk from other STIs? Either way, him catching an STI is one of the things that might change his undetectable status.

Note how, dishonestly, the article doesn’t state that you should use a condom because you may still be at risk from HIV from the supposedly undetectable man. The problem is “a variety of other” STIs according to GayStarNews.

As for PrEP, it’s almost irrelevant in this debate as only a few thousand men in the whole of the UK are on it. Out of a possible gay, bi and MSM (Men who have Sex with Men) adult population of 1.5 million!

Currently HIV is incurable and you only need to be unlucky one time. A liar, disorganised or troubled man, or one who just didn’t know the meds weren’t working can take you down.

Always use a condom whatever the guy says about his status. This is the message the (un)professionals don’t want to hear and will never tell you.