The Terence Higgins Trust (THT) safer sex leaflet “Hick from the Sticks” dates from around 1993. In it, new arrival to the city Simon has lots of sex and wonders to himself “I always use condoms, but am I really safe?” 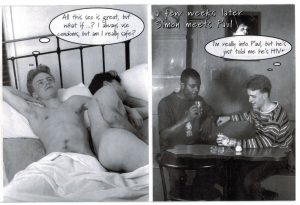 Simon meets Paul, a decent guy who tells him he is HIV+. “Any of the others could have been positive… the only difference with Paul is that he’s told me,” thinks Simon. So he’s happy to get together with Paul again and it looks like the pair might end up in a relationship. 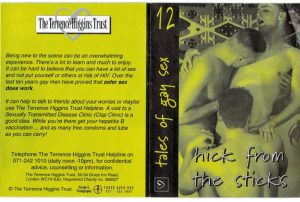 The leaflet finishes with THT telling us “it can be hard to believe that you can have a lot of sex and not put yourself or others at risk of HIV.

“Over the last ten years gay men have proved that safer sex does work.” 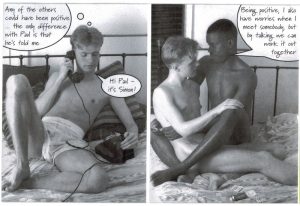 Fast forward another 25 years and consider what we’re all being told now in the frenzy to promote PrEP.

Often it’s suggested that condoms are somehow unreliable and that having to depend on them leads to fear and anxiety about sex. This is despite about 95% of positive gay men being undetectable for the virus now thanks to modern meds, unlike back in 1993 when probably all were infectious.

There are even dangerous crackpots commenting on Facebook with the ludicrous claim that condoms never prevented new HIV infections!

Just suppose that what we’re being told now is true and that we were being lied to a quarter of a century ago. As you can see, THT was encouraging those of us who were negative to have sex with gay men who were positive. That would have been highly unethical, if not criminal, if it was the case that condoms didn’t offer top notch protection against HIV.

If condoms were dodgy, then Paul having told Simon would NOT be be the “only difference” to sex with the other guys. Sleeping around, on average Simon would have something like a one in ten chance of meeting a new guy who was HIV+. Whereas regular sex with Simon would mean potential exposure to HIV every time.

THT states that a decade after HIV first became a big issue, it was proven that “safer sex does work”.

The gay (ill)health industry can’t have it both ways. Either they were misleading us and putting us at great risk back in 1993 or they are lying and misleading us now. So which is it?

We’re clear about which it is… The numerous gay men who are aged in their 40s, 50s and older and who are still negative despite lots of sex over the last 35 years are the proof that condoms are highly effective.

The recent court case about the hairdresser who wasn’t on treatment for HIV and deliberately infected about six gay men is the proof that if you don’t use condoms (or are unlucky enough to meet a criminal sociopath who damages them) you are quite likely to end up with the virus if the guy isn’t “undetectable”.

You have no way to know whether a gay man is or isn’t undetectable. Him “telling you” certainly isn’t to be relied on. He may be lying or his status could have changed without him knowing.

Telling the public that your new product is better than the old one, perhaps even talking down the earlier item, is a classic marketing technique. It’s something that should have no place in health education.

However the gay (ill)health organisations are commercial operations. Always on the look out for funding handouts and driven by (un)professionals who want their jobs to continue and who are ever hopeful of hopping up another rung on the gay career ladder. No doubt drug companies (which help fund some of the same gay organisations) would also like to see hundreds of thousands of gay men on expensive £400 a month PrEP paid for by the NHS. Instead of just using a 20p condom as and when needed.

The propaganda frenzy surrounding PrEP tends to focus only on the pluses with no mention of the minuses. It’s unethical, with potential consequences for any gay man who swallows the hype without thought.

Suddenly they were faced with using a condom or disclosing their status to every new partner they hoped to have raw sex with. Something that would make anyone who was HIV negative and (foolishly) into barebacking run a mile.

So a devious two-pronged strategy was drawn up. On the one hand, using half truths, they would suggest that positive men who are undetectable for the virus pose “no threat” and they would ignore 35 years of safer advice about never trusting what a gay man tells you about his HIV status (whether negative, positive or undetectable).

On the other hand, condoms would be downplayed and even falsely stigmatised as having let us down all these years. Some evil, manipulative online repeaters would go as far as to pretend that condoms never worked at all.

There can be no doubt that this perverse undermining of condoms has led to more fear and anxiety about sex and more stigma towards condomed sex with gay men who are positive.

Of course the manipulators are desperate for PrEP to be the answer to all of this and are clicking their ruby slippers wildly in the hope it will come true. Unfortunately many of them don’t seem to have a brain.

Imagine the fear in years to come if we experience drug resistance to antibiotics and HIV meds (including PrEP which is just some of the same drugs), as well as much higher rates of serious sexually transmitted infections (STIs) such as hepatitis.

Throughout history there has never been a time when there has been so much high-risk gay sex going on, such easy casual hook ups courtesy of online apps, so much travel and so many sexually transmitted bugs that are becoming worryingly resistant to antibiotics. What could happen? Then there are the longterm side effects of the HIV/PrEP drugs. Some probably unknown as yet and to be uncovered in years to come.

Make no mistake, these are wonder drugs for people who have HIV and no other choice. But we think taking them instead of using condoms, as many gay men are certainly doing, is madness.

It doesn’t take much imagination to see how this could end in tragedy if PrEP is your only “protection” or if you’re positive and barebacking.