If someone takes PrEP when they are already HIV+ but don’t know that they’re infected, this can create a hard to treat, drug resistant strain of HIV.

We said that encouraging gay men in the UK to obtain and use PrEP through websites was a dangerous and stupid strategy for that reason. 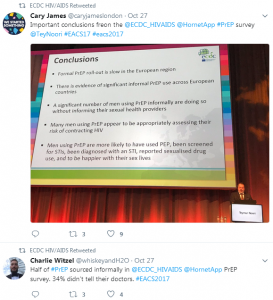 The survey carried out by dating service HornetApp of its European users reveals that half of those on PrEP sourced it “informally” and of those 34% didn’t tell their doctor.

Most men who use PrEP are barebackers and thus are the most likely to be HIV+ already without knowing.

This is creating the perfect environment for drug resistant HIV to grow. Eventually it will pose a threat to all gay men who don’t use a condom, including those who are on PrEP (which may not work against it) and men who are already positive as it may compromise their treatment.

Have the PrEPsters and gay (ill)health organisations done this deliberately to try and force the NHS to provide PrEP for all?