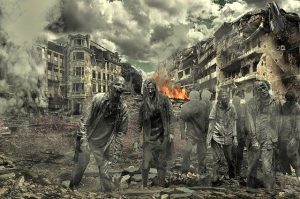 In 2050 sexual health has moved on. All LGBT/HIV organisations have merged into one empowering global charity STIGMA standing for Sexual Transmitted Infections Growing Movement Association. The Global Executive Officer is Herbal Cumslut a transgender, non binary, gender fluid, HIV positive/undetectable, Hep C, Syphilis, Gonorrhoea, Chlamydia carrying activist who loves chemsex but at the same time has tragic experiences. She or Ze depending on the day of the week is the Ultimate Stigma Warrior. Everyone in the organisation has to have one of the diseases, if not all, in the battle to fight the stigma. You only progress in the charity once you have caught another STI as it’s the only way to understand the tragedy faced by the community.

All LGBTQIAA+ are on PrEP, injected at a six monthly interval as many were hopeless at taking the pills on a daily basis in the past. As soon as LGBTQetc “come out” as gay/whatever they have a PrEP party with all their family and friends and your local non judgemental non stigmatising LGBT friendly doctor comes along and injects them to a round of applause and cheers. “PrEP works” they chant. It’s the responsible thing to do. They are now ready for “natural” sex as STIGMA has promoted and trained the doctors. No judgement.

As flawed hopeless chemsex barebackers, as they were stigmatised in 2017, PrEP effectiveness is around 30-65% depending on how you manipulate the statistics. Many didn’t take the pills on a daily basis, due to the tragedy of being a chemsexer and the PrEP stigma they faced in the gay community along with the years of internalised homophobia. HIV mutated and a drug resistant HIV virus made PrEP ineffective to some strains of HIV. It was not the chemsexers fault, they were flawed and it was the NHS which should bare all the responsibility of providing the sexual health needs that the community wants. No slut shaming.

However becoming HIV positive is now seen as a right of passage, a second coming out, to be celebrated: joining the poz community. With a cash strapped NHS, which only provides emergency operations and PrEP, becoming HIV+ enabled the LGBT community to force the NHS into providing life long access to its service on a six monthly basis. To do otherwise would be stigmatising, homophobic and judgemental.

A HIV positive gay man is presented, as in 2017, as having a longer life expectancy than those who are HIV negative as they have regular check ups and live a healthier lifestyle. However the tragedy of having HIV is also presented, although it’s “just a virus”. The true battle to fight, which has never gone away, is the stigma of having HIV. Although in fact no one has a problem with someone with HIV anymore, surveys always show an undercurrent of stigma towards HIV. The fight against stigma will go on forever.

As well as taking PrEP for added sexual health options in the toolshed of armoury, gay men only seek natural sex with HIV positive men who are undetectable or those on PrEP. It’s the safest sex possible. However this is now considered as highly stigmatising towards HIV positive men with a high viral load who, due to some HIV strains being resistant to the virus, can never obtain an undetectable status.

This new stigma must be fought. So STIGMA is at the forefront of getting HIV negative gay men and undetectable men to have natural sex with HIV positive men with a high viral load. This fear must be challenged as we are all HIV equal. Science has proved that ARV prevent HIV transmission, mostly.

If you are wondering where condoms feature in the sexual toolshed armoury well they don’t. Condoms have been so highly stigmatised by 2020 that they are never mentioned again. No one puts condom user on their dating app as they risk being called a condom nazi, a denier of science, “old school” and a pleasure denialist.

However some radical gay men who don’t go along with STIGMA still use condoms and don’t take PrEP in defiance. Code words such as “latex” and “protection” are used on the underground condom scene which has developed. Using a condom has become highly fetishised as kinky and subversive. Some PrEP users and poz guys are actually seeking out condom nazis as a way of fighting the stigma they now face. HIV positive men with high viral loads who are facing discrimination in the natural sex community are welcome in the condom community where no shame or judgement is cast. They are not stigmatised.

This Brave New Condomless World 2050 ushered in by the unprofessionals of the gay (ill)health charities in 2017 may have resulted in more untreatable and drug resistant STIs, tragedy in the LGBT community and ever growing stigma as a result but they always have hope not fear (and funding opportunities) that in the future we can end HIV.