This is why we at Gay Men Against PrEP (GMAP) link barebacking with mental health and self-esteem issues and we say that it is a form of self harming.

Unfortunately it seems these sites were largely driven by men who were HIV+ but negative men were pulled into this sick world too. Particularly gay men who had low self-esteem, who weren’t educated about HIV, who didn’t care about themselves and some who thought they were invincible and would never contract the virus, but then did.

This was hyped and promoted to such an extent that sometimes, bizarrely, in some cities where there were a lot of positive gay men, negative men felt left out and wanted to “join” by becoming HIV+. Again a mental health issue.

SOME POSITIVE MEN ARE RESPONSIBLE INDIVIDUALS

It’s important to note that there are many HIV+ gay men who behave in a responsible way and are condom users. Unfortunately there are others who see a positive diagnosis as a green light never to use a condom again and who, through their irresponsible behaviour, have actively help to build a culture of barebacking here in the UK, when we had previously done so well over the years encouraging condom use.

What isn’t realised is the extent to which the gay scene in major UK cities is populated by men who are HIV+. The percentage seems to be much higher than among the general gay population nationwide.

And this has been helped along by the rather insane notion that no behaviour should be judged or condemned, no matter how depraved and damaging it is to others and wider society. These manipulative, narcissistic gay men have even hijacked and used the feminist phrase “slut shaming” as a further defence.

Which brings us to the gay health industry. Originally the sector was focused on funding and promoting condom use and helping gay men who were stricken by AIDS.

It was natural that some men who are HIV+ would work in gay health to represent the interests of positive gay men. But no doubt that has been bolstered by a good helping of the political correctness and cronyism which is endemic in the gay community.

A great many of us are staying safe by using a condom every time as we always have. However, insisting on condoms for sex has become much more difficult over the last 15 years. Whereas it used to go without saying that one would be used.

All very dangerous for impressionable young gay men who have just come out and read and believe their rubbish, some of which is funded by public money.

We could be on the brink of something very worrying indeed if increased barebacking amongst gay men, enabled by PrEP and normalised in the gay community by these wicked individuals, leads to drug resistant strains of HIV beginning to take hold, along with other antibiotic resistant sexually transmitted diseases. It would be a great danger to negative men but also to positive (especially if barebacking) who might find that HIV medication becomes less effective for them. It’s just a pill a day they claim, however many are on 3, 5 or more due to resistant HIV strains. 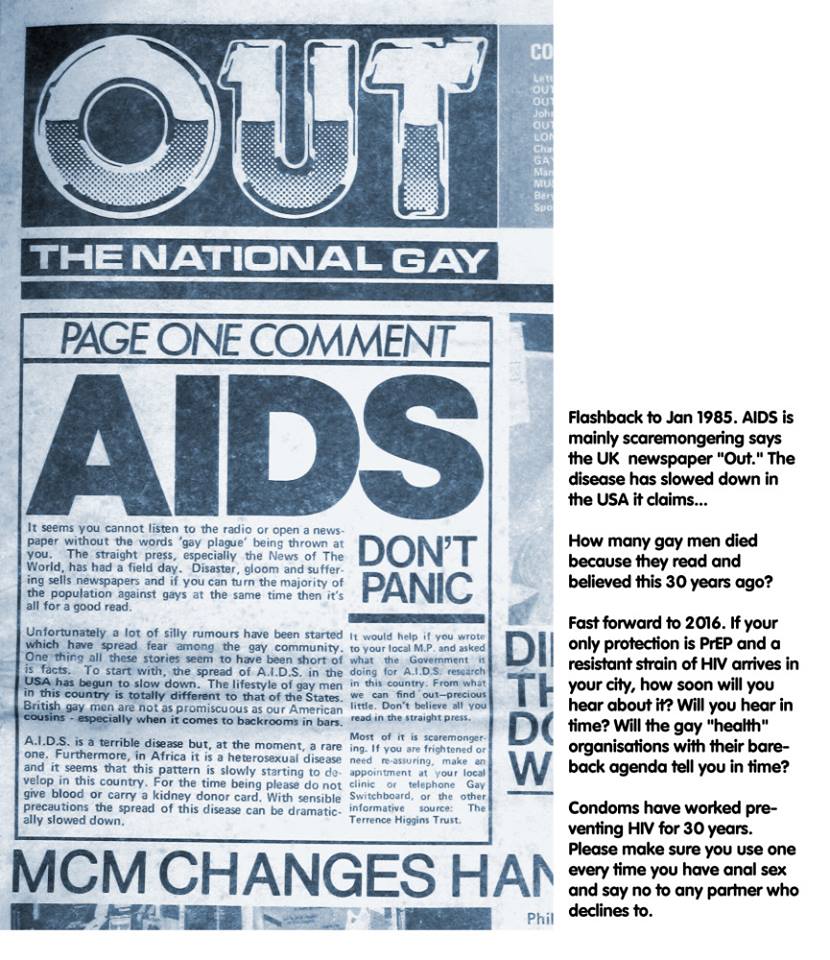 HOW DO WE FIGHT THIS?

It is completely unacceptable to encourage young gay men to ditch condoms in the face of the threats we face.