Twenty-five years ago, Gay Men Fighting AIDS (GMFA) was a worthwhile organisation. Its stylish ads promoting condom use would pop up on Channel 4 in the middle of the gay current affairs series “Out”. 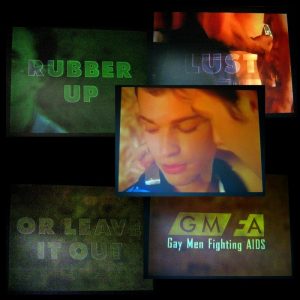 About twenty years ago the charity began to change. Despite being just a few percent of the UK gay male population, due to political correctness and cronyism HIV+ gay men began to take most of the jobs in UK charity organisations such as GMFA. Gradually it became a pressure group that disproportionately promoted and focused on the interests of gay men who were HIV+. Some 93% of the gay male population was being sidelined.

Recently they even tried to sideline the punchy name, changing it to the bland HERO. Part of a trend by gay organisations which want to have a more fluid remit which they can manipulate to suit whatever agenda they settle on. And to hell with those who shed blood and tears, sometimes died, and raised funds to get these organisations started decades ago.

London was always a little more extreme than the rest of the UK. But from the mid-1990s onwards the gap seemed to widen. Metropolitan gay organisations were full of scene-going gay men who were immersed in the extreme culture. They were careful to survey only gay men who tended to be just like them so they could push their agenda.

Advice about condoms began to disappear, until it was possible to read an entire article from GMFA about sexual health without rubbers being mentioned once. This is why we started our campaign.

The key to understanding everything that is going on at the moment with PrEP, undetectable HIV status and moaning about HIV stigma is to realise that, for the last fifteen years, organisations like GMFA haven’t wanted condoms to be the answer.

Just about every gay man who is HIV+ became infected because a condom wasn’t used. As we’ve seen in the news recently, a few were unlucky and were maliciously infected by a man who took off or damaged the condom. When gay men become HIV+ they are even less likely to use a condom going forward. Among some, raw sex is a fetish and obsession and “celebrated” as a community.

Many (though not all) gay men who became HIV+ hated using a condom and still hate them. For the more mentally fragile of these men, seeing a condom now or hearing or reading the word is a “trigger” which reminds them of their failure, infection and positive status.

These are the men who tend to be running the gay health organisations.

We read confessional accounts from some of them about how, for example, they went out one night in the mid-1990s, got drunk, didn’t use a condom, and became positive. Those of us who were around in the 80s and 90s, and remember what the safer sex culture was like in those days, shake our heads in amazement at such stupidity, at a time when AIDS could well be the death of you.

It’s extraordinary that individuals who were so reckless and deluded, were allowed to staff organisations that were set up to keep gay men safe from HIV. We can all make a mistake. But these men didn’t learn from theirs. Instead, their views on life and sexual risk taking became convoluted policies for “health” organisations like GMFA and were foisted onto the 93% of UK gay men who were negative and wanted to protect themselves.

It isn’t the case that just because someone has an illness they are somehow qualified to advise others on how to avoid or deal with it. Just in recent months a PrEP importer has landed a (ill)health charity job. His recent unprofessional and foul-mouthed appearance giving a talk in Manchester caused a stir. His presentations tend to feature Muppet and Disney references.

In a BBC3 documentary, screened just over ten years ago, the reporter challenges a member of staff at GMFA over a poster that doesn’t mention condoms. The criticism is brushed off and later the same individual became CEO of the charity.

Under his tenure, GMFA lost all its funding. Apparently in part because funders didn’t like the condom-free message. GMFA ended up having to sell its headquarters and currently its future hangs in the balance. Meanwhile the CEO left for a new job in the HIV charity sector and his “advice” continues much the same.

In a recent article about HIV stigma (once again) the current CEO writes that gay men who are HIV+ were “unlucky.” The self-delusion and playing to the positive readership continues…

The stigma is against reckless barebackers – positive or negative

It isn’t the case that we discriminate against positive men.

These are the mysterious deaths of young gay men, typically in their thirties, that we still hear and read about. Though often the HIV+ connection isn’t made clear for reasons of PC.

The gay (ill)health (un)professionals in the UK have been partly responsible for driving down condom use over the last twenty years and should be ashamed of themselves. Their current pro-bareback policies are an enormous gamble.

PrEP leads to a large increase in other sexual infections. At a time when antibiotic resistant sexually diseases are already here and resistance to HIV medications seems to be on the increase. The longterm health implications of HIV meds (and therefore PrEP too) still aren’t clear.

Trusting gay men to know their HIV status or be honest about it has never been a reliable way to keep yourself safe. Yet somehow this has become a plank of current advice from the gay (ill)health organisations. Tricky wording implies that if he says he’s “undetectable” you “can’t” get HIV from him. This is utter bollocks and madness.

Vulnerable young gay men are being thrown to the wolves just to keep a bunch of shouty, bullying barebackers happy. Fortunately the NHS continues to do the right thing.

The future may not be us “ending HIV” as the organisations like to pretend. Instead it may be us seeing lots of our fellow gay men suffer and die once again. This time from drug resistant sexually transmitted infections, resistant HIV and the side effects of medications. Those of us who care about our health and survival may end up having to abstain from sex completely or use a condom even for oral sex because an infection will become such a great risk.

Don’t listen to their “advice.” Continue to use the reliable condom.